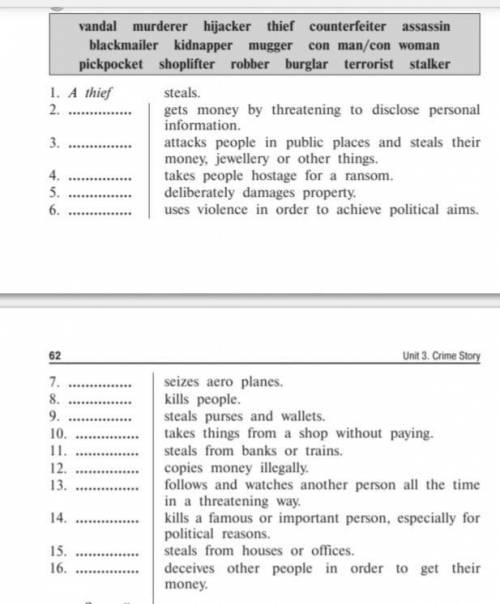 2. She is still under investigation by the Spanish police.

3. Crime is a complex issue — we can't simply blame poverty and unemployment.

4. Avoid that area after dark.

5. I deeply regret what happened — there's no excuse for it.

6. We wrote to the editor demanding an apology.

9. This car was in collision with an ambulance.

10.He is serving a three-year sentence for burglary.

11.The prisoner suddenly broke free and ran towards the car.

12. The study aims to find out what makes people commit crimes.

An assassin- kills a famous or important person, especially for political reasons.

A blackmailer - gets money by threatening to disclose personal information.

A kidnapper - takes people hostage for a ransom.

A mugger - attacks people in public places and steals their money, jewellery or other things.

A con man/con woman – deceives other people in order to get their money.

A shoplifter - takes things from a shop without paying.

A robber - steals from banks or trains.

A burglar - steals from houses or offices.

A terrorist - uses violence in order to achieve political aims.

A stalker - follows and watches another person all the time in a threatening way.

A pickpocket - steals purses and wallets.

: We might go to Spain this summer, but we aren't sure:

Perhaps Harry can help you with this exercise:

The boy was eating cake when his mother came into the room:

: There isn't any milk for my breakfast:

Many people from Poland went to Scotland in the 20th century: 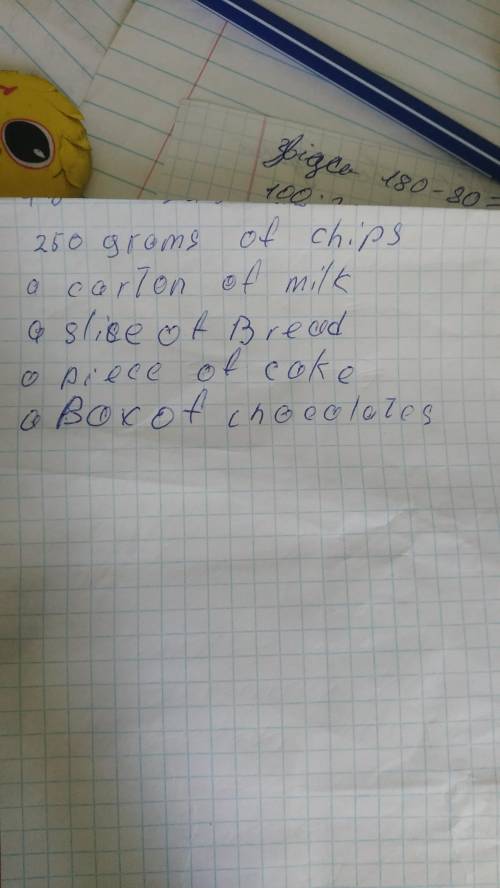 2.They had them painted.

4.I had them planted.

Grams or box of chocolate

Английский язык, 08.03.2019 02:40, JelliTD
1) подберите к выделенным в тексте словам определения из списка 1-10unscripted, were broadcast, dates, bizarre, outcome, voting, recruit, outrageous, deliberate, villains 1. has a romantic relationship with 2. doing something not by chance but according to a certain plan 3. bad characters in books or films 4. using no written scenario
5. choosing formallty between two or more candidates 6. shocking 7. invite people for a job 8. final result 9. strange and unnatural 10. were on tv/radio 2) - what do you feel when doing sports? - that’s an interesting question i’ve much thought about. well, take any emotion, like anger, frustration, disappointment or pain, and try to hide what you feel deep inside, try to bottle
everything up till you’re ready to burst like a powder keg. then you can say that this is what you feel when doing sports, especially if it’s an important event or competition… you feel as if your mind goes dark and empty and you don’t actually know why you’re doing it, but you’re doing it to the best of your abilities. you run, hit or tackle and you know that each member of
your team is feeling every little bit of it. and when it’s all finished, and you’re standing over your opponent like a victorious warrior, you may feel really satisfied, you feel like a god… ответить на вопрос 1.what emotions do people have when doing sports? 2.are these emotions strong or weak? 3.what kind of sports does this sportsman do? why do you think so?
4.who are sports people compared to?
Ответов: 2
Посмотреть

Английский язык, 09.03.2019 18:20, Veid
Раскройте скобки поставив глаголы в нужном времени 1)i (have to)get up at eight o clock last monday 2) we (not have to)go to school last week 3)you (have to) clean your room on saturday? 4)i (have to) phone my friend yesterday 5)my mother (have to)work last sunday напишите
Ответов: 4
Посмотреть

Английский язык, 30.03.2020 15:05
1) Something that people wrongly believe to be true
2) Likely to change or become dangerous without warning
3) Making you feel ashamed and embarrassed
4) Someone...